The varsity field hockey team, led by senior captains Whitney Butterfield, Mary Kate Cashman, and Sophia Hegel and coached by Marion Richardson, is nearing the end of its second varsity season. The team’s current record of 5-8-1 shows its remarkable improvement since last year when it ended the season with just one win.

The Monarchs’ pre-season entailed summer practices beginning in July and continuing through August. The work put into training led to wins against Ranney, Mater Dei, St. Rose and Keyport. 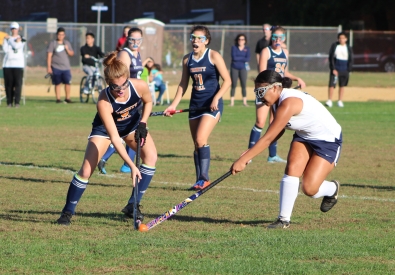 Sophomore Sarah N. (left) battles for the ball in an away game against Freehold Boro on Oct. 14. (Photo by Fiona Corrigan)

“We went into this season as a more established team because of all the hard work we put in,” senior Alex Konczyk said. “Our team gained a lot of underclass girls who had experience playing, so we were more comfortable going into games. The younger girls looked up to the older girls because of experience, and it helped shape our team into a more competitive force.”

The team qualified for the Shore Conference Tournament this year, an accomplishment in itself, but lost 6-0 in the preliminary round against 11th-ranked Toms River North on Oct. 10. The Monarchs’ regular season play will end on Friday, Oct. 25 with a home game against Red Bank Regional but they will continue on to the first round of the state tournament where they will face Mount St. Mary’s Academy.