Priya V. celebrated signing her National Letter of Intent to play squash at Dartmouth College with her parents at home and the school community via Zoom on May 1. (Photo courtesy of Trinity Hall)

Although these seniors could not have a traditional signing day, the circumstances did not stop the administration and their parents from making the day special for them. Despite some technical difficulties that all have become accustomed to with virtual learning, the community was still able to celebrate these students. Over a school-wide Zoom meeting, the five seniors were honored for their hard work in academics and athletics that allowed them the opportunity to play their sport at the college level. 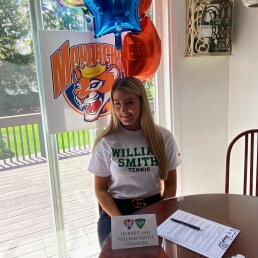 The athletes’ kitchen tables, front lawns and office spaces were decorated with their chosen college’s logo and colors. With the support of their parents and siblings, the athletes were able to sign  their letters in front of the whole school. They received lots of lots of clapping and cheering as well as congratulations and well wishes through Zoom’s chat feature.

Murphy recently decided to continue her athletic career at the collegiate level and looks forward to the future. “I never really knew if I wanted to play tennis in college due to the time commitment,” she said. “When I chose Hobart and William Smith Colleges, the opportunity came and I decided why not try it. I’ve been playing tennis forever and it would be strange to live without it in college… Overall, I am very excited to be on the tennis team at HWS.”

The students-athletes have been committed to their sport through school teams and outside organizations and have all helped the school grow its athletic programs. They will be able to take the lessons learned at Trinity Hall to the next chapter of their athletic and academic careers. “Trinity Hall has played an important role in my becoming a college athlete,” Murphy said. “Trinity Hall taught us to work as a team both mentally and physically.”

Adriana M., joined by her parents via Zoom on May 1, committed to continuing her swimming career at the University of Scranton. (Photo courtesy of Trinity Hall)

Masters feels similarly to Murphy. “As a freshman, I learned the Trinity Hall four core values of faith, leadership, respect and perseverance,” Masters said. “I have learned what it means to trust God in whatever I am doing, especially competing, respect others in and out of the pool, persevere and push through any challenges that come my way and be a leader to everyone else on my team. These four core values have helped shape me into the athlete I am today, and I will continue to uphold them at Scranton. One of the main reasons [I chose Scranton] is the community and the environment that I felt when stepping foot on the campus.”

Ehnot also spoke about why she chose her school. “I chose Cornell after I did an overnight with the team,” Ehnot said. “I knew I wanted to go to a school with strong academics and a good sailing team. Cornell fits both of those aspects [because it] is currently ranked third in the country for women’s varsity sailing and provides many resources and benefits for their varsity athletes… I am thankful to Trinity Hall for their support of the sailing program.”

The Trinity Hall community celebrated with Lauren E. and her parents via Zoom as she signed her National Letter of Intent to sail at Cornell University on May 1. (Photo courtesy of Trinity Hall)

Ehnot advises prospective student-athletes to work hard in both athletics and the classroom.  “One piece of advice I would give to anyone who is trying to be recruited for a sport is to keep your academics to the same standard you keep your sport,” she said. “Coaches want to recruit athletes whom they know will be a good academic fit for the school as well as athletics.”