Plenty of excitement and new ideas are flowing from the classrooms at Trinity Hall this fall with the addition of eight new teachers. The last issue of the Trinity Hall Tribune introduced readers to the new members of the STEM team; this issue will present the new world language teacher, Martin Januario, and the three new humanities teachers: Dana Cain, Michael Kabash and Samantha Mattsson. 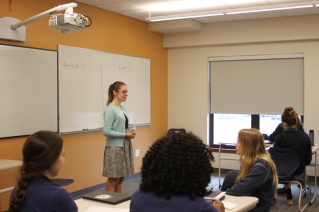 Cain teaches sophomores in AP World History and World Religions, and she is the co-advisor of the speech and debate club. Cain, who previously taught history and theology for five years in public and private high schools, is excited about what Trinity Hall has to offer.

“The school is so neat because it’s a startup school. It’s very student centered, it has a great community, it has a really close faculty, and overall it’s just been a great place to work,” said Cain, who is a member of the Royal Rumble Blue Team and loves to spend time at the beach.

Another new history teacher is Kabash, who teaches freshman level World History. He is also the advisor for the Glee Club and also hopes to get involved with the Queen’s Court Company by helping with the spring musical. Before joining Trinity Hall, Kabash built the music program from the ground up at Saint Mary’s School in Middletown, where he served as music director. Prior to his tenure there, he taught history at Eleanor Roosevelt High School in Manhattan, which was also a new school.

“What’s different [about Trinity Hall] is the environment. The teachers are great to work with. It just feels like a really academic and collegial place where everyone can be themselves. It’s unique, special and a really warm place,” said Kabash, who represents the Orange Team for the Royal Rumble and loves to surf. 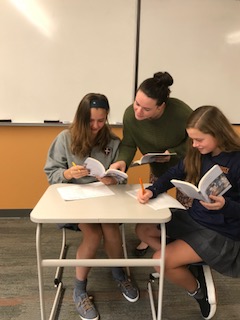 Mattson, also a Royal Rumble Orange Team member, teaches English to sophomores and freshmen while also advising the Students Against Destructive Decisions club and helping out behind the scenes in the school play. She student taught at the Toms River high schools while getting her Masters in Education from Monmouth University and was a wedding cake decorator prior to coming to Trinity Hall, where she has enjoyed her first few months.

“I just felt at home when I first walked in,” said Mattson, who spends her free time reading, writing and planning her upcoming wedding.

The world languages team welcomed Januario, who teaches French I, II and III, and is on the Orange Team for the Royal Rumble. Januario has taught French at high schools and middle schools around the state and student-taught while he was a doctoral student at Princeton University.

Januario is impressed by the teaching style at Trinity Hall compared to what he has previously experienced. “The teaching here is very different from the public school setting. I think we’re given more freedom to give the kids what we sense they need. The faculty here is very much implicated in the lives of their students and their success, much more so than in the public school setting,” he said. In addition to browsing flea markets, reading and trying out vegan recipes, Januario enjoys traveling to Canada, and he will be leading the student trip to Montreal over spring break.