Sophomore Colleen Kelly chases down the ball to regain possession from Ranney on Oct. 9. (Photo courtesy of Melissa Whelan)

The varsity team finished with a winning record of 8-7-1, including two wins against Ranney on Sept. 28 and Oct. 9. The team made the Shore Conference Tournament for the first time in school history, but lost in the first game to Freehold Borough on Oct. 17. They still advanced into the NJSIAA Non-Public B State Tournament, but ultimately lost 4-1 to Gill St. Bernard’s on Oct 30th.

Although the varsity team did not end their season the way they had hoped, it was a successful year nonetheless with promise of a bright future. “This season overall was a successful, and it was exciting. I hope we set a path in Shore Conference and that we continue to go further,” senior Isabelle Grimes said.

Coach Santos agrees that the varsity soccer team’s achievements this season will benefit not only the soccer program but the school’s athletic program. “I think this season is really going to help us because anytime you can make the Shore Conference tournament and the State Tournament and have a winning record, other people, including incoming freshmen, will notice that, and the more success you have, the better athletes you get, across not only soccer but all sports,” said Santos. 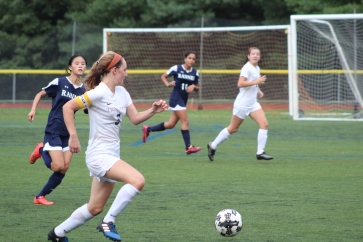 The JV squad had a tough season with each of its eight games ending in a tie or loss. Despite these difficulties, the team still made some memorable advances, most notably tying with Point Pleasant Beach. Freshman Leighton Van Wagner agreed this game lifted spirits of the team. “It was a really rough game, and we were all feeling really beaten down, but [the tie] made us even more motivated. Even though we didn’t win, we [were] all so happy,” Van Wagner said.

Van Wagner also enjoyed the season as a whole, commenting on the camaraderie of her teammates. “My experience playing soccer as a freshman at Trinity Hall was extremely successful because I felt welcomed by the upperclassmen and my fellow teammates. I made my closest friends on that team, and I was able to simultaneously enjoy my time and better my skills,” she said.