The varsity tennis team has improved this season to earn a winning conference record of 9-3 and overall record of 11-4. Coached by Dana Lenneper and Christopher Arecchi, the team advanced from the first round of the Shore Conference Tournament for the first time in Monarch history by beating St. John Vianney before losing in the second round to Rumson Fair-Haven. Soon after, the team advanced to the semi-finals of the NJSIAA Non-Public B tournament by beating Mater-Dei and Holy Spirit. The Monarchs put up a tough fight against Gill St. Bernard’s, eventually losing to the state-ranked team in the semi-final round.

“I am proud of the way the team has stepped up and made a name for themselves this year.  Everyone has made such great improvement” said Lenneper. 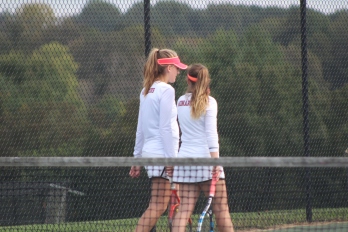 The first doubles team of sophomore Isa M. and junior Kathryn O. discuss their winning strategy during a break in a match. (Photo courtesy of Dana L.)

The doubles team, led by sophomore Isa Murphy and junior Kathryn Ortenzio, maintains a strong 7-3 record.  Freshman Lauren Ward is undefeated with a 9-0 record, and sophomore Sydney Riepl has an impressive 8-1 record for singles matches. (Statistics are as of Oct. 11.)

“Not only have we improved upon our skills but, also our compatibility as a team.  Knowing your team is behind you has gotten us through wins and loses during tough matches,” team captain Madison Huber said.

The Monarchs prepare to finish out the rest of the season with the Monmouth County Tournament on Oct. 21-22 and a match against Hun on Oct. 24.