Trinity Hall welcomed eight new faculty and staff members this school year. Last month the Trinity Hall Tribune featured an article about the three new humanities teachers, so in this article we introduce readers to the other new members of the community: Tracey Andrejko, Elijah Brookes, Ruth Velasquez, Kelly Weber and Caitlin Zavorskas.

Math teacher Andrejko is passionate about the problem-solving based math taught at the school and is excited to have the opportunity to teach students in this unique way. She is also an assistant coach for the swim team this winter.

“I am looking forward to getting to know the girls more and to become more involved in the Trinity Hall community,” said Andrejko about her role as coach. 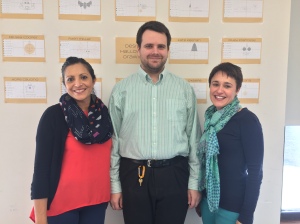 Andrejko previously taught pre-calculus at Carmel High School in Carmel, Indiana and honors geometry at North Central High School in Indianapolis, where she earned the Teacher of the Year Award. Andrejko graduated from Boston College with a degree in computer science, then received her Master of Science degree from Drexel University in mathematics learning and teaching.

Brookes, who teaches physics to all of the current freshmen, was previously a professor of both math and physics at Rutgers University, Rowan University and Middlesex, Burlington and Salem Community Colleges. Brookes decided to make the switch to teaching high school because he wanted to spend more time teaching and interacting with his students. He hopes to have the opportunity to also teach math and work with the robotics team at Trinity Hall as well.

Brookes, whose credentials include a B.A. in physics, M.S. in mathematics and Ed.D in math education, all from Rutgers University, also worked as a materials science researcher and a temperature calibration specialist, as well as a tutor in math and physics.

Velasquez, a native of Honduras, currently teaches Spanish I and II while also serving as a faculty co-advisor to the Cultural Club. Although she previously taught Spanish at Shrewsbury Borough School, she feels transitioning into teaching at an all-girls high school has been a major change; however, the supportive environment has helped to ease the transition.

“I love being here. I feel like part of a whole family,” said Velasquez, who received her B.A. in education with a concentration in Spanish from Monmouth University after moving to the United States at age 17.

Weber is excited to join Trinity Hall as the new Admissions Counselor. Although she is trained as a school counselor, Weber is enjoying this new field of school admissions and is looking forward to seeing Trinity Hall “through the seasons” and the excitement that comes with the first graduating class. 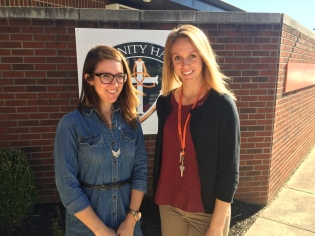 “I hope in the years to come to get more involved and maybe becoming an advisor for clubs or maybe getting involved in advisory groups and helping out where I can,” said Weber, who loves the camaraderie she has witnessed among the teachers and students at Trinity Hall.

Weber, who is both a New Jersey certified school counselor and a National Certified Counselor, attended Rowan University where she earned a B.A. in psychology with an honors concentration, and she received her Masters of Education in school counseling from Rutgers Graduate School of Education.

Zavorskas, the school’s new administrative assistant,  felt working at Trinity Hall was an opportunity she couldn’t decline. She is enjoying the welcoming community and working with a diverse and talented group of people.

“I have a daughter [who is] almost four years old, so we’re a long way off, but I think about where she’ll be going to school and what kind of education she’ll be able to get, so knowing that there are places like this is reassuring,” said Zavorskas, who is eager to being more involved in the school and getting to know everyone better as the year continues.

Zavorskas received a B.A. in Media Studies and minored in Women’s Studies at Quinnipiac University where she wrote for the school newspaper, The Chronicle, and was the Event Planner for the Mass Communications Honors Society.