“Mrs. Havens and I are extremely proud of the work that all members of the club put into these two conferences,” club faculty co-leader Nicole Sadowski said. “Those attending NAIMUN and PHILMUN put in hours and hours of research and wrote papers before they even step foot into the conference, and then spent up to 10 hours each day in committee engaged in substantive debate on global issues and honed their skills in cooperation, innovation and effective policy writing. Members who were not able to attend conferences assisted conference delegates by performing topic and general country research. Our more senior members were always available and eagerly answered questions and provided advice to new members.”

NAIMUN is an international conference that hosts over 3,000 students from 30 countries and 40 states. It is regarded as one of the oldest UN simulations for high school students in the world. This is the school’s second year attending the conference, and after a rocky start with a broken-down bus, the trip sailed smoothly.

Students were engaged in crisis committees, including managing the UN Stabilization Mission in Haiti after the 2010 earthquake and participating in the Cuban Missile Crisis from both the Russian and Cuban perspectives. Others passed resolutions to improve sustainable global tourism and examined the intersection of women and climate change. 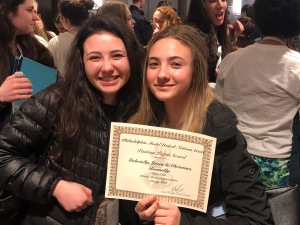 Sophomores Christina D. and Gabriella G. each earned the position paper award for their respective committees at the PHILMUN conference in Philadelphia on Feb. 27-29. (Photo courtesy of Nicole Sadowski)

Although it was a smaller conference, PHILMUN was equally successful and enjoyable. Nearly 75 percent of the club members who attended PHILMUN had no prior MUN experience, but they did not let that deter them. In these committee rooms, student led debates about industrialization’s effect on health and had to solve crises concerning bomb threats and the coronavirus.

While all participants gained valuable public speaking and research skills, many of the school’s delegates also received awards for their efforts. At NAIMUN, junior Gabby Sorrentino received an honorable mention for her work on the 2002 United States Senate Council. At PHILMUN, senior Alessandra Arege, senior dual delegation of Maya Gardner and Alexa Sadowski, and sophomore dual delegation of Christina Donnelly and Gabriella Green each earned the position paper award for their respective committees.

“I’ve enjoyed doing MUN during my time at Trinity [Hall],” Gardner said. “After going to PHILMUN this past weekend and NAIMUN two weekends ago, I have reflected on the past conferences I have attended. It has taught me to believe in myself and that what I have to say is important. It especially felt full circle to me as I won awards [at] both my first and last conferences.”