The following article is a first-person account of what our student reporter observed at the March for Life event.

The 47th annual March For Life was held on Jan. 24 in Washington, D.C. and attracted tens of thousands of participants, including many students and young adults. I attended the March with my parish to get an inside look at what goes on at such a popular politically- and religiously-fueled event.

Though not directly associated with a particular political or religious movement, the March for Life featured a mostly Republican and Christian panel and audience. Prior to the start of the rally, Christian rock band We the Messengers performed at the site of the March. Other noteworthy speakers included N.J. Representative Chris Smith, attempted abortion survivor Claire Culwell and, via video, Vice President Mike Pence.

Most notably, President Donald Trump became the first sitting president to speak at the March for Life. His 13-minute speech was met with overwhelming cheers and applause from the crowd. “Unborn children have never had a stronger defender in the White House,” he said. 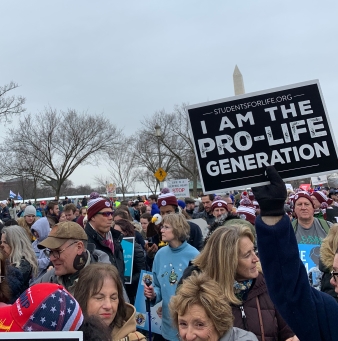 Signs, like the one above, were carried by many participants at the March for Life on Jan. 24 in Washington, D.C. (Photo by Morgan Kogan)

After the president’s remarks, the focus of the rally briefly veered towards his re-election, with those near me chanting, “Four more years!” Soon, though, the president of the March for Life Education and Defense Fund, Jeanne Mancini, appeared on stage and the crowd quieted to listen to more speeches before the March itself.

Among the protesters were thousands of teenagers, many marching with their high schools, pro-life clubs and churches. I spoke with a few of them to understand why, in many cases, they had travelled dozens of hours to attend the rally.

“We believe a person is a person, no matter how small and that everyone deserves a voice,” a 15-year-old girl who travelled to Washington from Scottsdale, Arizona said. “Abortion is not something that I would like our next generation to be a part of.”

Some attendees marched solely because of their political beliefs surrounding abortion, but others had a personal connection to the issue.

“When Roe v. Wade passed, my brother and his girlfriend became pregnant. The first thought that crossed my mind was, ‘They could get an abortion. That sounds so easy.’ The fact that it crossed my mind so easily was very scary, so I took an interest in the Right to Life movement,” a Catholic grandmother from Manasquan, N.J. said.

Ultimately, the goal of many protesters was similar: to stand firmly in their morals and protect humanity. Though this was conveyed in a variety of ways, from remarks on stage to graphic videos displayed on the side of the road, those whom I interviewed passionately and undoubtedly marched to protect the unborn.