The swim team began its season on Nov. 11 with a new head coach, Bill Lynch, and a new assistant coach, Hunter Romanowski, along with returning coach Alyssa Morreale, who is now serving a part-time role.

“Like any new endeavor, it is important for a new coach to become familiar with the members of the team as soon as possible,” said Lynch, who previously coached the boys and girls swim teams at Ocean Township High School for 23 years. “I have had nothing but positive and supportive experiences from the girls and the school staff.”

As of Dec. 7, the team was ranked 19th in the state and the favorite to win the Non-Public B division by nj.com. As four-time defending state champions, the swimmers are looking to improve their ranking as the season progresses, defend their titles and place at the top of local championship meets. 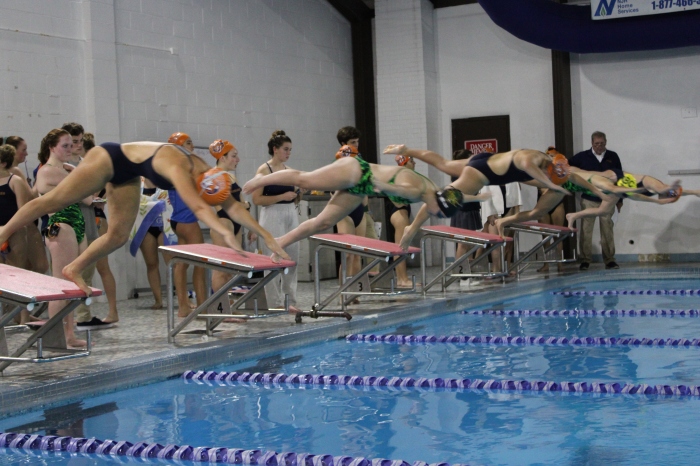 For more than a month, the team has been practicing every morning at the Ranney School pool, and their dedication has translated into positive outcomes during competitions. “Our main goals are to place high at the Shore Conference and Monmouth County meets and to make it to Non-Public B State Finals,” junior Courtney Cushman said.

During one of their practices, the swimmers also enjoyed a visit from alumna Caroline Gmelich ’17 and her teammate at the University of Virginia, Abby Richter. The two NCAA finalists and Olympic Trial qualifiers shared technical tips and helpful advice with the younger athletes.

Like Gmelich, three seniors on the team will be continuing their swimming careers in college: Maddie Condon at Bryant University, Adriana Masters at the University of Scranton and Katie Wright at the University of North Carolina at Chapel Hill. Condon and Wright signed their National Letters of Intent in front of the school community on Nov. 15.

“This team is very solid. We have a great mix of experienced upperclass swimmers and younger swimmers ready to contribute to the overall success of the team,” Lynch said. The first true test for the swimmers this season will come on Jan. 4 when they compete at the Monmouth County Championships at Neptune Aquatic Center.