On April 15, 2019, at 12:20 EST, the world was alerted of the news that the Notre Dame Cathedral in Paris had caught on fire and was not showing any signs slowing down. By the time the fire had been extinguished, the roof and spire were destroyed, collapsing into the cathedral.

The collapse of the Notre Dame Cathedral signifies the end of an era, as the cathedral of all cathedrals has fallen. Millions of people around the world have unified as one voice and rallied together, calling for the cathedral to be restored to its splendor. As with a fallen soldier, bruised and bloodied beyond repair, why attempt to restore him to his former glory instead of allowing him to rest in peace, surrounded by loved ones and remembered for years to come? 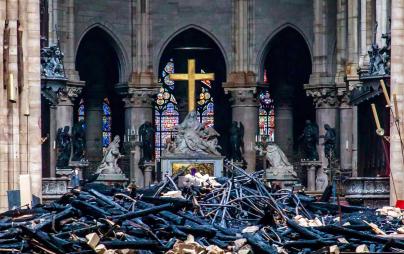 A fire ravished the Cathedral of Notre Dame in Paris on April 15. (Photo courtesy of Getty Images)

According to Food Aid Foundation, there are approximately 795,000,000 starving people in the world. Why, with millions of people in the world suffering, would $1 billion be put into the construction of a Catholic cathedral. Is it suddenly untrue that the works of mercy, which are Christian practices, instruct the Church to feed the hungry?

One billion dollars is enough money to buy a package of ramen noodles (at approximately 20 cents per pack) for more than 20 billion people in the world. With 795 million people suffering from starvation, each starving person could receive 25 packages of noodles. However, it seems that the rich, generous donors of this money would rather see a building restored over the lives of millions of people.

Never in the Bible does God tell His people to build glorious cathedrals with elaborate jewels, golds and riches. Jesus Christ lived a simple life of poverty and dedicated his life to helping others and bettering of the world. Are Christians not called to follow in Jesus’ footsteps and help ease the suffering of others in the world?

At the time of the fire, the Easter season was well underway, and many people who pledged to donate to the Cathedral readily poured their money into the fund for the reconstruction of the Cathedral within hours of the fire. Relief organizations and charities could have utilized those same donations to fund global humanitarian efforts to improve the lives of millions rather than improve a damaged building. Human life is more important than any physical structure, no matter how meaningful and symbolic that building may be.