Freshmen and sophomores in the Model United Nations (MUN) club, along with advisors Jennifer Havens and Nicole Sadowski, attended the PhilMUN conference in Philadelphia from Feb. 28 to March 3. The students won many awards over the course of the weekend.

MUN members spoke highly of the trip and claimed it brought them together and showed them new ways of thinking. “I became more aware of the many major problems that our world faces,” freshman Sheridan Sainato said. 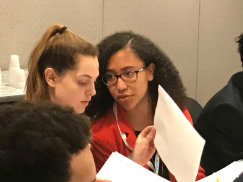 Sophomores Charlotte W. and Gabriella S. strategize for their plan at PhilMUN in Philadelphia on March 1. (Photo courtesy of Nicole Sadowski)

Other participants had similar experiences. “It was an amazing experience for all of us, whether it was our first real conference or not,” sophomore Caitlin Ramos said. “We were exposed to so many new ideas and people, and we gained a better understanding of the world, all while stepping out of our comfort zones and having fun.”

This was the second conference the MUN club participated in this school year, following the Washington, D.C. conference in February. Because that conference was exclusive to junior and senior members, the Philadelphia conference gave the freshmen and sophomores a chance to show off their skills. These skills were evident in the awards that many students received. As a whole, Trinity Hall won Outstanding Medium Delegation. Sophomore representatives Isabella Giallanza, Morgan Kogan, Ramos, Gabriella Sorrentino and Charlotte Walsh, and freshmen Sanan Gueyikian, Olivia Havens, Haley Nelson, and Sainato each received individual awards for their respective delegations.

“We were very successful at the Model UN conference. We won a lot of awards, and it was great surprise for everybody,” Kogan said.

The students who participated spoke of the new knowledge they gained from the experience and their genuine appreciation for the trip.

“The Model UN trip taught me not only about my topic but taught me how to work with others. This trip has allowed me to make many new friendships that I hope to keep in touch with,” Sainato said.

“The way our chairs treated us empowered us to really step up and debate like we were genuinely in the UN. It is apparent that the directors of PhilMUN prioritize a comfortable learning environment for us delegates to grow,” Walsh said.

Sophomore Jackie Chafart felt similarly appreciative of the experience. “We all got closer. It was my first time at a conference, and I learned the real procedures and figured out how to delegate. It was a really interesting experience overall,” she said.