The Trinity Hall volleyball teams have now completed the first half of their sixth season, with hopes of success in October. The varsity team, led by Coach Carol Moser, Assistant Coach Andrea Carini, and junior co-captains Kelsey Cooper and Riley Francese, has a current record of 1-18. The JV team, led by Coach Gianine Ippolito and sophomore co-captains Madison Kelly and Charlotte Walsh, has a current record of 6-14. Both teams united to push through a tough first month of the season that was filled with injuries and tough opponents.

The varsity and JV teams both won their first matches of the season at St. Rose on September 11. The JV team also beat Long Branch on September 14, which was a surprising, but welcome, victory.

Riley F. goes to set the ball in the varsity match against RFH on Oct. 5. (Photo by Elea Chiusano)

The varsity team has had no additional wins following their triumph against St. Rose, partially due to the injuries of multiple key players early in the season. Despite their losses, Francese said the varsity team has continued to rally by staying together as a team and maintaining a positive outlook at each game.

“The team has found ways to persevere through the obstacles faced this season. We have all worked together to fill in for the people that couldn’t play due to injuries,” Francese said. “Even though this is not the record we had hoped for, the team is making major improvements. I’m proud to be on a team that is able to stay positive through everything we’ve been through.”

Junior Maya Gardner currently holds the leading serving percentage at 94 percent, with fellow junior Sam Devine just behind her with 93 percent.  Junior Ryen Miller leads the ace count with twelve aces, Cooper and Francese lead the assist and kill totals for the team, and Cooper holds the current leading number of points on serve at 31 points. 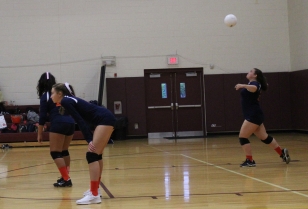 Madison M. sets up for the serve in the JV match against RFH on Oct. 5. (Photo by Elea Chiusano)

Moser said the girls have impressive and determined attitudes. “The girls make us unique–their passion for the game, their perseverance and never-give-up spirit, and their enthusiasm as a team to support and embrace each other–in good times and bad,” Moser said.

The varsity and junior varsity teams each have a dozen or more regular game days in the month of October in addition to competing in the Prep State Tournament, the Shore Conference Tournament and the NJSIAA State Tournament.