The sailing team has had an impressive spring season, highlighted by their biggest accomplishment: qualifying for the MASSA Mallory Qualifier in Christchurch, Virginia as the only all-girls school team. This race hosts some of the best teams in the Mid-Atlantic who sail competitively all year long.

Led by co-captains junior Julia LaForgia and sophomore Lauren Ehnot, the team enjoyed much success at their weekly races on Wednesdays at the Toms River Yacht Club. They also competed at a regatta on St. Patrick’s Day where they finished among the top four boats in the state of New Jersey, which qualified them for their race in Virginia. 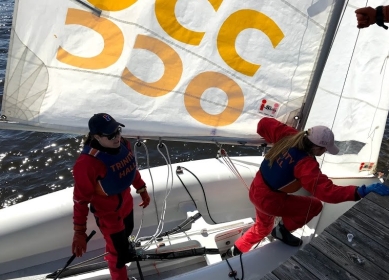 Julia L. and Isabelle G. prepare to race on May 27 in Toms River. (Photo courtesy of Jennifer Jamer.)

“Competing in Virginia was a great experience for our young team. We were able to compete against other teams that have lots of experience and do relatively well for it being one of our first regattas on such a large scale,” Ehnot said. “I am very proud of all our efforts this year. We really worked as a team and stayed positive throughout every race. In practices we gave our best efforts, and I think that really pushed us to go to the next level this year.”

The team has achieved all of these accomplishments with the guidance of faculty adviser Jennifer Jamer, who is planning on taking up sailing for the first time this summer to give her a better understanding of the sport. “I really enjoy watching sailing, and I find how sailing is one of the few sports at the high school level where girls compete equally with boys very interesting. It allows us to even have the opportunity to occasionally beat CBA,” Jamer said.

On May 23, two Trinity Hall teams competed in the NJISA Girls Championships in Toms River against 13 other teams. LaForgia and senior Isabelle Grimes placed fourth and Ehnot and junior Hope Maguire placed seventh.

The team finished the season at the Last Hurrah Regatta on May 30 in Toms River where they placed seventh out of 17 teams. Additionally two Trinity Hall sailors were singled out for special recognition by the governing body, NJISA.  Sophomore Alexandra Chrystal was recognized as 1st Team All State Crew and Junior Julia LaForgia was recognized as 2nd Team All State Skipper.

“For us to have two sailors recognized this way as a small and fairly new team reflects really well on our program and the kind of students we cultivate,” Jamer said.