The sailing team has been reaching new heights this season. The team of seven student-athletes, coached by Hillary Clauss, is ranked third out of 13 teams in the NJISA Mid-Atlantic Scholastic Sailing Association.

The team has had strong showings at their weekly races at the Toms River Yacht Club, where they recently tied for second out of 18 teams throughout the state. The team also travels out of state to compete against schools in New Jersey, New York and Connecticut. One of these regattas took place in New York on Sept. 30 and Oct. 1. 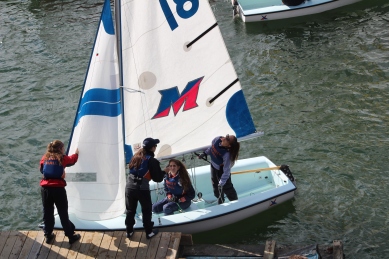 Members of the sailing team make last minute preparations before a regatta at SUNY Maritime on Sept. 30. (Photo courtesy of Jen Jamer)

Sailing team captain junior Julia LaForgia showed excitement about the team’s efforts. “We have been having a strong season, traveling to SUNY (State University of New York) Maritime in New York for a regatta, where we placed fifth overall,” LaForgia said.

Lauren Ehnot, a sophomore sailor, said that the team has been doing excellent this season and looks forward to the program’s future. “We constantly push each other to improve. We take turns skippering and crewing during practice so we understand all the positions in the boat, and we always have a lot of fun,” Ehnot said.

LaForgia and Ehnot recently took fifth place at the NJISA Fleet Qualifier on Oct. 14 at Toms River Yacht, which earned them a spot at the prestigious MASSA Fall Silver Championship in Annapolis, MD. on Oct. 21-22. The next day, the team returned to the Toms River Yacht Club to compete in the NJISA Team Qualifier with LaForgia, Ehnot and Kailin BurnsCohen skippering the boats. If they win a sail-off next week against Rumson-Fair Haven, the team will advance to MASSA Fall Team Championship on Nov. 4-5.

While the fall season will soon be coming to a close, the sailing team looks to continue their success in the spring season.