At the end of April, four sophomores were accepted to the Metro Scholars program to further their theater careers. Each student was accepted in a different area of the program after submitting an application and auditioning to show their potential: Shea Campanella for set, costume and lighting designs; Patti Frees for costume design; Julia Hallman for acting; and Skye Loures for stage management. 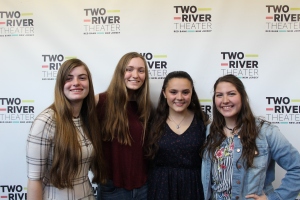 The highly-selective Metro Scholars program, run by Two River Theater in Red Bank, is open to high school juniors in New Jersey who would like the opportunity to learn about professional theater. Since the program’s initial year in 2005, 141 students have completed this program, which includes shows and workshops as well as other commitments to the theater.

When applying for this program, the sophomores were motivated by their passion for all aspects of the theater. “I auditioned because I love theater, and it’s a really great opportunity to experience and learn about every aspect of theater, not just acting, which is what I’m used to,” Hallman said.

Loures is passionate about stage management, which she has been involved in through the Queen’s Court Company productions. “I’m looking forward to meeting actual stage managers, actors and actresses, and set and lighting designers to gain experience,” Loures said.

Campanella said that she is excited to work “with people who love theatre as [she] does and make new friends.”

Frees expressed similar hopes for her experience. “I’m most looking forward to working alongside such talented people, the fellow metros and those at the theater, who are so passionate about the design process and theater in general,” Frees said.