The softball team, led by head coach Robert O’Brien and assistant coach Andrea Carini, is off to an exciting start this season, winning its first game of the season on April 12, an achievement that last year’s squad could not claim until May 16.

Senior Kathryn M., shown here on the mound against Point Pleasant Boro on April 26, has pitched every game for the Monarchs so far this season. (Photo by Alyssa Morreale)

Another clear sign of the improvement the team has made since last year is the offensive power they showed when they beat Mater Dei, a team that shut them out twice last year, by a blistering score of 40-26.

To date, the Monarchs are off to a 1-3 start, losing to Lakewood, Rumson-Fair Haven and Ranney, but with 10 more games left to play, the team expects to notch a few more victories this season.

The team has been working with a lineup of senior Kathryn Murray as pitcher with Kelly behind the plate; sophomores Jane Banahan, Patti Frees, Carolyn Litwin and Bailey Powers playing the infield; and senior Joanna Ferrer, junior Elizabeth Witek, junior Diana Ramos, freshman Hannah McCarthy and freshman Hannah Wietzke in the outfield. 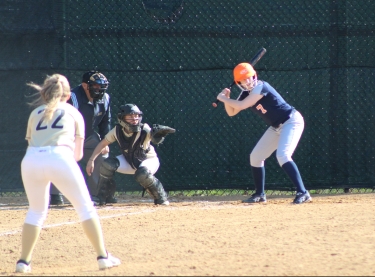 The team is made up of both veterans and new players, but the difference in skill level does not prove a barrier in the team’s friendship. “Softball has been a great outlet for me to meet new people and have new experiences,” Wietzke said.

The Monarchs have been working hard at practices and doing various drills to help hone their skills; however, Ramos explains that practices are for more than just improving their physical skills. “We’re always laughing and talking and having a good time. Practice is where we bond as a team,” Ramos said.