The Model United Nations (MUN) club returned to the Philadelphia Invitational Model United Nations Conference from March 1-4. Faculty advisors Jennifer Havens and Nicole Sadowski brought 21 freshmen and sophomores, their largest group yet, for the long weekend at the conference.

The PhilMUN conference welcomes both experienced and inexperienced students, making it the ideal conference for freshmen and sophomores. More than 500 student delegates, many of whom were juniors and seniors, represented different countries in debates regarding topics about Latin America and the Caribbean’s ‘Identity in the Global Age.’

Sophomores and freshmen from the ModelUN Club attended the PhilMUN Conference in Boston on Feb. 9-11. (Photo courtesy of Melissa Whelan)

“After all our preparation, I felt confident in my public speaking skills to advance issues in my committee,” sophomore Riley Dunfee said. “It was a great learning experience to draft resolutions about the problems we have researched all year.”

To prepare, the students researched their assigned country’s position on the two topics that would be discussed in their committee, which was with 40 other student delegates. Some of the issues included constructing civil societies, the World Health Organization and child mortality. They then wrote position papers describing their country’s beliefs and stances on the given issues for their committee.

The four-day conference included an opening ceremony and daily committee meetings where students spoke about the issues and also networked with other delegates. For each topic, the committee spent a day and a half developing and drafting a paper on the solution.

“We are so proud of the girls,” said Sadowski. “The committee chairs said that the girls did a great job in advancing issues and that they are excited to see them as delegates in the future.” 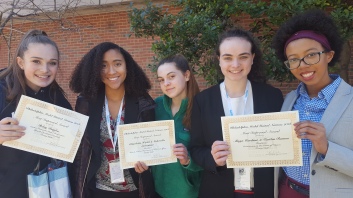 Trinity Hall students made a strong impression at the conference with five students recognized as most improved: the delegation of Maya Gardner and Caitlin Ramos representing Honduras on the Commission on the Status of Women, the delegation of Gabriella Sorrentino and Charlotte Walsh representing Honduras at the UN Department of Political Affairs, and Riley Dunfee who represented a prosecutor in an advanced committee.

Aside from the committee meetings, the college students who ran the conference spoke to the delegates about the the topics they felt passionate about, such as the women in STEM and self-identity. There was also a trivia night for delegates to get to know each other outside the committees.
The MUN club will be putting the PhilMUN conference on the agenda for years to come based on the positive feedback from the faculty advisors and students. Additionally, the MUN club looks to host another middle school conference for next school year.