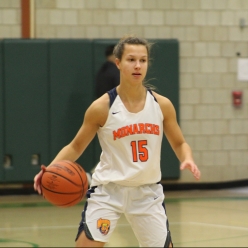 During the past three months, the varsity basketball team has impressed competitors, coaches, parents and students alike. Thanks to their dominating play all season, the team entered the Non-Public B State Tournament with a strong number 3 seeding. Despite losing that second-round game in overtime 61-68 to the Patrick School on March 1, the Monarchs celebrated their most successful season to date, including an overall record of 20-6 along with the program’s first 1000 point scorer, senior Bridget Andree.

Not only has the team made history with their achievements, the team has grown much closer and  stronger through bonds that have been developing since November. “We always get each other psyched, whether it be from our ridiculous singing on bus rides or our pregame huddles,” Andree said. “I think our strong bond off the court translates to how we play together on the court. We try to capitalize on each other’s strengths and finish every game knowing that we left everything we had out there.”

An additional milestone of this year’s basketball season is the graduation of the team’s inaugural seniors of Andree, Kathryn Kwapniewski, Catherine Loder and Nicole Ventura. Head varsity coach Pat Grier, who has been coaching these four girls for many years, is extremely proud of all the accomplishments they have earned. “The seniors on this team will leave a lasting legacy for Trinity Hall basketball players to follow. They have been special role models for the younger players. Their leadership, kindness, compassion and [work ethic] will be remembered for years to come,” Grier said.

The JV team, coached by Lauren Pappa, has had an enjoyable and successful season as well, with a final record of 8-5. They exhibited strong efforts, especially as a young team. “The JV team really improved throughout the season. We accomplished a lot because we are a young team, and we even have girls who have never played before,” sophomore Maggie Ward said. “Overall, I think we worked really hard and had a good season.”