The lacrosse team has made Trinity Hall history this past spring under the guidance of head coach Dana Lenneper and assistant coach Emily Karpinski. Finishing with an overall 5-13 record, the team celebrated the most victories in a single season since the program began, with notable wins against St. John Vianney, Ranney, and Stuart Country Day. 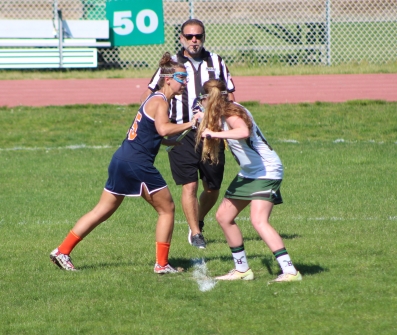 Junior Kathryn K. faces off against her opponent from Brick Township High School on May 17. Photo by Alyssa Morreale

“I think our season went really well,” said Lenneper. “We were definitely coming in as the underdog being the first year in the Shore Conference and our first real season at [the] varsity [level,  and coming in with eight new freshmen, six of whom had never played lacrosse before.”

Cusat added that the team’s work ethic is truly what made this season special. “This team has improved tremendously since the beginning of the season. We have became so close as a team and worked great together. Although we played in a tough division, everyone on the team played as hard as they could every game,” Cusat said. 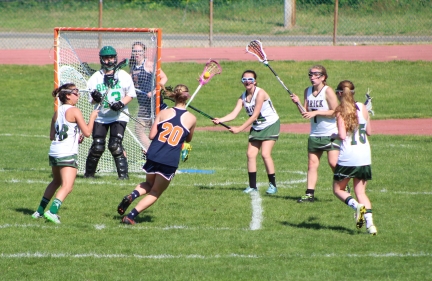 Freshman Colleen K. drives to the goal against Brick Township High School on May 17. Photo by Alyssa Morreale

As part of a very competitive Shore Conference, the team has put themselves on the map as a legitimate contender. With only two seniors and a few girls who had never held a lacrosse stick before, the team worked to gain momentum and further establish the groundwork of the program.

“Since most of the team was inexperienced to lacrosse, watching our progress since our first scrimmage was really cool. We grew and learned so much together,” said sophomore Grace Kenney.

Senior Brianne Dwyer recalls the first win of the season with pride. “This season when we got our first win it was fantastic. The drive we all had to push ourselves together as a team has never felt any better when it came down to a Trinity win. Yes, many teams win games, but Trinity doesn’t play for the wins. We play for the game and to push ourselves to be better,” said Dwyer.