Sophomores Hannah Reynolds and Abigail Devine established the debate team this year with the help of faculty member Melissa Whelan to oversee the club’s 20 participants. On Feb. 4, Devine was joined by fellow sophomore Madison Huber, freshman Grace Shimkus and junior Jackie Fletcher to participate in the New Jersey Speech and Debate League at Freehold Township High School, representing the club in its first competition.

Fletcher and Devine competed in the JV Public Forum branch of the Speech and Debate League, an all-day affair, arguing points and holding their own against about ten other high school teams on current event topics. To prepare for the debate on the Cuba Embargo, Fletcher and Devine researched their argument while also finding counterpoints and debating each other.

Through many hours of research and planning, Fletcher and Devine proved themselves to be skilled debaters, convincing judges in each round of their point and eventually earning second overall in their section. Fletcher credits their win to quick wit and argumentative skills. 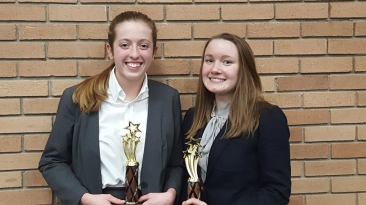 “It was intense but the analysis and rhetorical thinking skills we use here in English definitely helped in arguing our point,” Fletcher said.

In addition to Fletcher and Devine’s success, Huber and Shimkus participated in the Original Oratory section of the Speech and Debate League, where they each delivered ten-minute speeches from memory on a topic of their choice. In addition to their own research, the students used the advice and ideas they received while practicing their speeches with other teammates and teachers to enhance their speeches. Using evidence, logic and emotional appeal, Huber raised awareness of climate change while Shimkus discussed the dangers surrounding the gun control issue.

The competition proved to be a valuable learning experience for all of the participants.

“Considering we did not know what to expect from our first competition, we enjoyed it and look forward to future competitions,” said Huber.

Whelan is proud of the debate team and looks forward to future events.

“Now that we understand how the tournaments run, we are looking forward to registering next year for more debates and having more teams compete. We are also considering a speech tournament here on campus,” said Whelan.

As the club members sharpen their skills, they anticipate to grow as a club in order to give students more opportunities to work on argumentation, public speaking and collaboration.