In the last few months, several students were recognized for their hard work and dedication with awards, scholarships and nominations. In fact, some students will be traveling out of the country as a result of their achievements.

Sophomore Jackie Fletcher was selected as the tenth grade winner of Seton Hall University’s Sister Rose Thering Essay contest, a state-wide competition that focuses on promoting solidarity between Jewish and Christian studies in honor of Sister Rose’s lifelong commitment to fighting prejudice and bigotry against Jews. In her essay, Fletcher reflected on the documentary “Sister Rose’s Passion” by writing about how she has experienced prejudice in her own life.

“Being able to write about Sister Rose’s memory and legend helps her message live on and makes me feel like I am doing something to better the world. I am so thankful for her presence in the world because she has inspired so many people to do what is right, especially within Christian and Jewish studies,” Fletcher said after receiving her award at a special reception at Seton Hall University on May 1. 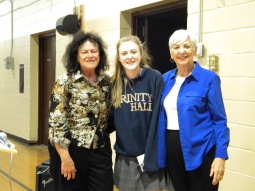 For the third consecutive year, the local chapter of the American Association of University Women (AAUW) ran an essay contest for Trinity Hall’s students. This year’s contest asked students how they can empower themselves to ensure their success and raise awareness of issues affecting females. The winner, junior Lilly McCann, wrote about starting a program with different types of social media that would help boost girls’ confidence. McCann envisioned it as a way to teach girls to feel comfortable in their own skin and give them a chance to reach out to other girls their age who could be going through similar experiences.

“It’s a subject I feel personally connected to, and it’s important for girls to see what’s happening around them through the use of social media,” said McCann, who received a $200 Barnes & Noble gift card.

Earlier this year, junior Alessandra Sanfratello received the first-ever Zilinski Memorial Scholarship award at Trinity Hall from the Lt. Dennis Zilinski Foundation and Memorial Fund. To get this scholarship, Sanfratello was tasked with creating a service project that would help American troops, so she focused on Dennis Zilinski, a former Christian Brothers Academy student who died in battle. In order to keep his memory alive, she proposed a dinner for the troops at Trinity Hall, similar to that of CBA’s Night for the Troops. At this dinner, she plans to have a guest speaker and musical performances by Trinity Hall’s glee club. The event would commemorate Dennis Zilinski and would raise money for the troops currently fighting to protect our country. 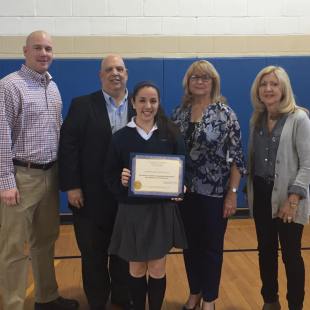 “I was honored and shocked to get the Zilinski scholarship, and I couldn’t wait to tell my parents. I look forward to carrying out my service project next year and keeping Dennis’ memory alive in our community,” Sanfratello said.

Another junior, Brianne Dwyer, was granted the Saint Timothy Award from the Diocese of Trenton for her service and dedication to the church in the past year. Throughout the year, Dwyer has devoted many hours to serving others within the diocese, including her assistance in running the Diocesan Youth Celebration (DYC), an event in which many the teens from the diocese gather and worship God.

“When I got the award, I was really excited because my sister received it the year before, so it was an honor to get the same award as her. I’ve been looking forward to it since the eighth grade, and it was such an honor to receive it and be recognized throughout the diocese,” Dwyer said.

Additionally, two Trinity Hall students will be traveling out of the country this summer as a result of their skills and talents. Due to junior Isabelle Pabon’s successes at the 2016 USA National Lifesaving Championship, she was invited to by the United States Lifesaving Association (USLA) to compete in an international competition in Japan in July. Pabon was the only lifeguard under the age of 19 to be chosen for this prestigious event, which includes a variety of events, such as surfing, swimming, running and paddling.

“I’m really excited to travel to Japan to meet and compete with some of the world’s best lifeguards,” Pabon said.

Freshman Mia Higgins has been selected to travel to Austria this July for the Salzburg music festival, funded by the Vienna Philharmonic. There, Mia will study the German opera Faust and also have the opportunity to see and sing in the opera there.

“I was really surprised because I study opera but never sang in one before, so it will be an interesting experience for me,” Higgins said.

Also receiving recognition for her work in the arts, junior Holly Koerwer was nominated for a Basie Award in the category “Best Actress in a Drama” for her outstanding performance in Trinity Hall’s spring play, Suite Surrender. Although she did not win the Basie, which recognizes excellence in Monmouth County High School Dramatic and Musical Theatre, just being nominated for the prestigious award is an honor.

Most recently, sophomore Alexandria Principe was selected as a Metro Scholar by the year-long highly competitive program for selected high school juniors run by Two River Theater in Red Bank. Principe will be a technical design intern throughout the upcoming school year, participating in two internships of 50 hours each.

“I applied because I have a passion for sound and lights and the things that make theater run,” Principe said, explaining that the program will give her more training and experience in the technical aspects of theater. “I’m taking AP classes and playing sports next year, so time management will be critical for me, but I know the experience will be worth it.”

Finally, junior Amelia Biebel received her Gold Award from the Girl Scouts of America on June 5 for her year-long project that provided dolls and doll clothing to children in local hospitals and homeless shelters. In total, Biebel distributed nearly 50 new and used 18” dolls, which were donated to her from family and friends.

“I just remember how much I loved getting dolls when I was a kid, and I wanted to pass that feeling on to other children,” Biebel said when asked about the inspiration for her project.

Clearly, the students of Trinity Hall are committed to improving their talents and serving others, as these awards and recognitions prove.