By Kathryn Kwapniewski, Staff Writer
This fall the cross country team competed in more than 10 meets placing in the top rankings in most of them. Prior to each meet, head coach Tony Avallone gave the girls a ‘C’ word to motivate them. These words included commitment, communication, courage, composure, compete and complete, leading up to the most important one of them all: “Championship.”

“Over the summer Coach [Maria Crowley] and I would talk. Knowing that we would make it to the championship at the end of the season was the inspiration for the ‘C’ words,” Avallone said. 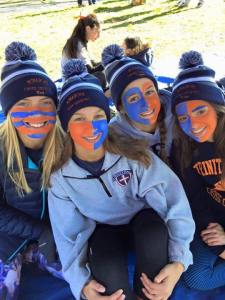 On Nov. 7, the cross country team competed in the Catholic Track Conference (CTC) where two freshmen, Ava Lynch and Kelly Cusick, medaled in the freshman race. The JV team placed third overall in their race, and the varsity team successfully defended their title as Group B CTC Champions.

“At first, I was too nervous to look at the result sheet but when I saw all the Trinity supporters jumping up and down in excitement, I knew that we did it!” Andree said after the meet.

By placing second, the team advanced to the Meet of Champions on Nov. 21, a competition featuring the top runners in the state, becoming the smallest school and youngest program to ever qualify for the prestigious meet. Although the team placed 20 out of 20 teams at Meet of Champions, just qualifying for the championships marks a major milestone for the team and sets a new benchmark for the thriving program. 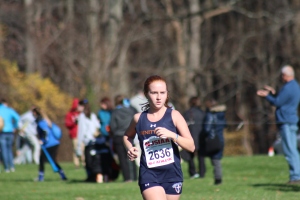 Sophomore Brigid C. heads for the home stretch at the Meet of Champions at Holmdel Park on Nov. 21. Photo by Melissa Whelan.

“I feel that this is an extremely special group of girls, from the first to 23rd, and it was a tremendous team effort,” Crowley said. “I knew they could do it, and I have never been more thrilled.”

Coach Avallone emphasized that the hard work that the girls put in, dating back to the summer, paid off throughout the season.

“We broke the season down into appetizers, the smaller meets, then the championship season is dinner,” Avallone said. In the end, the runners proved they were hungry for success.