As students arrived back to school in January, they were greeted with the news that they would have an international visitor with them for the winter. Trinidad Winter, cousin of senior Sophia Gana, joined the community from Santiago, Chile for two months as Trinity Hall’s first exchange student.

This cultural exchange is not new to the Winter and Gana families, as Gana had similar immersion experiences in the summers of 2018 and 2019. Because the summer break from school falls at different times in the U.S. and Chile due to the different timing of the seasons, both girls have been able to spend their summer vacations in each other’s country, attending school and practicing the local language. 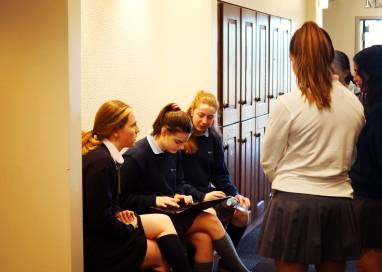 “I learned a lot of Spanish phrases and also that learning languages can be hard, but if you really try to immerse yourself for a period of time it can get a lot easier,” Gana said of her time in Chile. “It was more interesting to be the one in a different city and culture. I also got to see a lot of family I don’t see often and make friends. I got lucky enough to go twice so I was able to see old friends and really get to know them the second time.”

The unique opportunity to quickly improve her English was one of Winter’s main motivators for spending two months of her summer vacation in school. “I wanted to improve my English, and Sophia already went to Chile one time to see the family and do an exchange period,” Winter said. “My parents thought it was a good idea for me to come to Sophia and do the same thing.”

This is Winter’s first true cultural experience in the U.S., as her only other visit to the country was a trip to Disney World. “I didn’t get to know the culture [then],” she said.

Winter found American life different from that in Chile in several ways. One of them: the food. “Everything is greasy and salty and has sugar on it,” she said. Additionally, Winter said that Trinity Hall is different from San Francisco de Asis, her school in Santiago. “We don’t have different classrooms for different classes, you just have your own class and teachers come to your class to teach,” she said. “We don’t use computers, but I think that’s most schools here, too.” 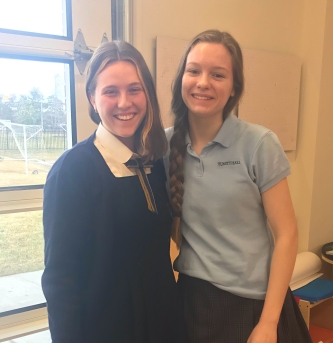 Trinidad W. (left) spent six weeks as a student with the Trinity Hall community while visiting her cousin, senior Sophia G. (right), during her visit from Santiago, Chile. (Photo by Isabella Giallanza)

Spanish teacher Melissa Fairchild, who helped coordinate Winter’s exchange, shared the ways that she benefited the community during her visit.  “We were blessed to have Trini with us…She arrived and seamlessly fell into step with the Trinity Hall way. Her kindness, perspective and willingness to be present were the exact reasons exchange programs are successful and ultimately foster true community engagement.”

Winter said her time at Trinity Hall has changed her in several ways. “My English will be better, and I’m improving my attitude inside class.” Although she recently returned to Chile to begin her junior year of high school, Winter anticipates that her time in the U.S. is far from over. “I am actually considering coming to college here, but I don’t know what my parents are going to say.”

Outside of school, Winter has been able to experience some quintessential American activities, including trips to the mall and Skyzone trampoline park, as well as a Hibachi meal. Despite the differences from her home, Winter said her favorite part of living in the U.S. is “everything” and she appreciates the American way of life. “I just like the way they do things,” she said.

“Now that I have a turn being the tour guide, it is fun to help Trini meet new people and make connections like I got to,” Gana said. “My favorite part is probably having someone to talk to all the time at home and teaching her funny things about the United States or New Jersey slang. I am going to miss how funny she is, but hopefully I will see her soon and I know we will still talk once she leaves.”

Overall, Winter enjoyed her experience at Trinity Hall and is grateful for the experience. “Everyone has been really nice to me, and I really appreciate that. I am really thankful,” she said.

Fairchild also expressed gratitude as well as hopes to support future exchange programs. “We were very lucky to have the community and the families that look for and support our programs. Without that we wouldn’t have been able to enhance our experiential learning programs with our first exchange student,” Fairchild said. “From this single experience we now have girls that are looking for their turn to share and collaborate beyond Trinity Hall and New Jersey.”