Sincethe start of the school year, Melissa Whelan, dean for student life, and other faculty members have been taking students’ phones during the school day when they see them being used. The students then pick up their phones at the end of the day from Whelan’s office. On an average day, Whelan has about three phones in her office.

In an attempt to send a competitively-friendly message to the students, Whelan presented a challenge to the student body: she would buy everyone in the school ice cream if the students went a week without having any phones taken away.

“There is harm in breaking rules of community because phones should be turned off and put in backpacks during the school day,” said Whelan, echoing the rule found in the school handbook. “If the students wanted to change the rule we could have a conversation, but going against it is not the way to achieve this.” 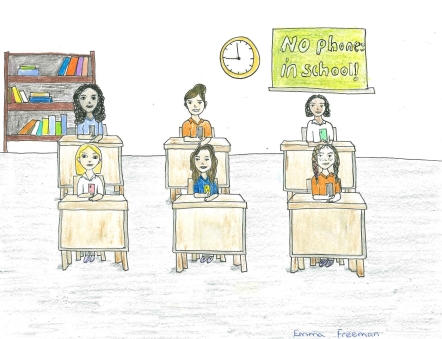 Students’ frequent violation of the school’s cell phone policy, which prohibits students from using their cell phones during the school day, has led to discussion on how to address the issue. (Illustration by Emma Freeman)

Whelan hopes that phone usage will be minimized during the school day in the future. “The idea is that the ice cream is an incentive, not the end, and that after the ice cream the students would continuously not use their phones instead of going back to using them,” said Whelan. “[Students] would receive further consequences because it’s going against the code of conduct.”

Students weigh in on the matter and believe there could be different steps to change. “I think that it is acceptable for Dr. Whelan to take phones, but maybe we should get a warning,” senior Sarah Maes said.

The controversial policy and related challenge is also the topic of this issue’s opinions articles found here and here.

Whelan believes phone usage needs to end in order to uphold the community’s core values. “My hope is that everyone in the community respects the norms we established from the cellphones to the uniforms, so we value the core value of respect.”