After a strong first half of the season for the winter track team, when several school records were set, the runners and coaches Tony Avallone and Jonathan Salamon trained in hopes of continuing their success at the Catholic Track Conference [NJCTC] and Non-Public B championship meets, where they ultimately placed second overall in both. 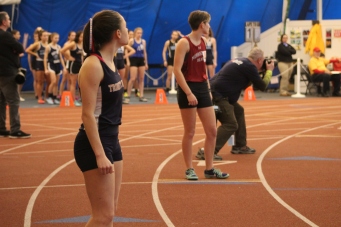 Junior Olivia A. awaits the baton in the Monarchs’ winning 4×400-meter relay at the Non-Public B Indoor Track Championships on Feb. 16 at the Bennett Indoor Complex in Toms River.  (Photo by Morgan Kogan)

“The season [was] great and the team finish[ed] up the season with the Monmouth Night of Miles for the JV team and the Group State Championship for the varsity team. Both teams did a really good job at the NJCTC relay meet, where several girls medaled and we placed second overall at the meet,” senior captain Hannah Reynolds said.

The team also placed second at the Non-Public B Championships on Feb. 16 at the Bennett Indoor Complex in Toms River. The Monarchs were led by senior Hannah Reynolds (1st in the 55-meter) junior Olivia Almeida (third in the 400-meter), junior Caroline Meany (6th in 3200-meter) and sophomore Ally Lawson (6th in the 1600-meter). The 4×400-meter relay of Almeida, junior Morgan Feiler, Reynolds and sophomore Gabby Sorrentino also claimed first place.

All of returned to the same venue on Feb. 24 to compete in the Meet of Champions. The experience gave the Monarchs a chance to compete against the top runners in the state while also gearing up for the spring outdoor track season. “Although we didn’t place, everyone did their best and gave it their all,” Meany said.

According to Avallone, “the season was a tremendous success and the outlook for the spring season is even better.”