The National Football League’s Super Bowl halftime show usually garners a fair amount of reviews with varied opinions regardless of the act performing, but the 2019 Pepsi Super Bowl LIII Halftime Show featuring Maroon 5 has quickly received an overwhelmingly negative response. Unfortunately, rather than providing an entertaining setlist and performance, the Super Bowl LIII Halftime Show starred a shirtless and tuneless Adam Levine, a mostly censored performance by Travis Scott, an unrecognizable member of an early 2000’s one-hit wonder group and an unimpressive tribute to SpongeBob.

Public scrutiny of Maroon 5’s halftime show began weeks before the Super Bowl when both Rihanna and Cardi B declined the offer to perform based on the NFL’s treatment of former San Francisco 49ers quarterback Colin Kaepernick. Maroon 5 seemed like a perfectly non-offensive act, and the halftime show’s producers selected the band in an effort to avoid any scrutiny. Despite the producers’ best efforts, both the band and the NFL received backlash for the choice of performer, and the NFL canceled the traditional press conference for the halftime act. Despite the controversy, Maroon 5 took the halftime stage on Feb. 3 in hopes of winning over hesitant viewers. 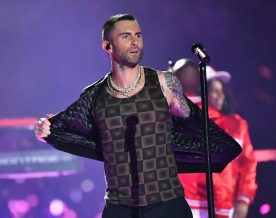 Maroon 5 frontman Adam Levine takes off his jacket during his half-time performance at Super Bowl LIII on Feb. 3. (Photo courtesy of time.com)

Maroon 5 opened their performance with the first single, “Harder to Breathe,” from their debut album, Songs About Jane. While the song performed well commercially in 2002, it was hardly a show-stopping opening number, and it gave audiences across the country a sense of what they were in for. The rest of Maroon 5’s setlist included “This Love,” “Girls Like You,” “She Will Be Loved,” “Sugar” and “Moves Like Jagger.” Although the majority of the songs were meant to evoke a sense of nostalgia, nearly all of the numbers fell short, crowded by a noticeable lack of autotune on lead singer Adam Levine’s vocals, an absence of sets, costuming or dancers, and constant interruption by the night’s other less-than-entertaining performers.

In what was most likely an attempt to replicate the success of past halftime collaborations, rapper Travis Scott and R&B singer Big Boi were invited to perform short acts alongside Maroon 5. Travis Scott was introduced by an excerpt from the iconic Nickelodeon cartoon, SpongeBob SquarePants. This moment was meant to be a tribute to SpongeBob creator Stephen Hillenburg, who passed away in Nov. 2018, but much like Scott’s performance, the clip fell short of endearing. The majority of Scott’s “Sicko Mode” was censored, and the fact that a sizeable portion of Scott’s only song had to be bleeped out proves that his music was too risqué for family audiences.

The performances by Big Boi and the Voice of Atlanta Choir both felt like forced attempts to include Atlanta’s soul and R&B culture. Big Boi, who was formerly a member of the 2000’s group OutKast, performed two songs, “Kryptonite” and “The Way You Move.” Both Big Boi and his songs were unfamiliar to the vast majority of American audiences, and the numbers left people more confused than entertained. The inclusion of the Voice of Atlanta Choir in Maroon 5’s performance of their 2018 pop hit, “Girls Like You,” was equally confusing, and audiences across the country were unimpressed by the out of place performance in the already bland halftime show.

Audience responses to the Pepsi Super Bowl LIII Halftime Show have been stunningly negative, and within less than a week, the video posted on the NFL’s official YouTube channel has gained 793,000 dislikes in sharp contrast to a mere 115,000 likes. The performance didn’t fare much better in the press, with USA Today referring to the show as “far from good,” and Vox calling it “fine.”

Halftime viewers quickly took to Twitter to express their negative opinions, and in true 2019 fashion, began to create and share hundreds of online memes ridiculing both Adam Levine’s choice of apparel and his decision to take his shirt off in the middle of “Moves Like Jagger.” Levine responded to criticism on February 4 by saying via Instagram, “…we thank our critics for always pushing us to do better. One Love.” It seems that the Pepsi Super Bowl LIII Halftime Show may have found one positive critic in the Maroon 5 frontman himself.