The varsity hockey team made school history by not only playing but winning the team’s first game with an impressive score of 8-2 on Dec. 20 against Westfield at the Middletown Ice Arena. The team will continue their season against Lawrenceville on Jan. 19 and Kent Place on Jan. 26, which will be the team’s first fan day at Red Bank Armory.

In addition to winning its first ever game, freshman Adriana Crepaldi was nominated for and won the Jersey Sports Zone’s New Jersey Devils December Hockey Goal of the Month award for her goal against Westfield. (Watch Crepaldi’s goal here: https://www.youtube.com/watch?v=DXTA0hImf2c ) 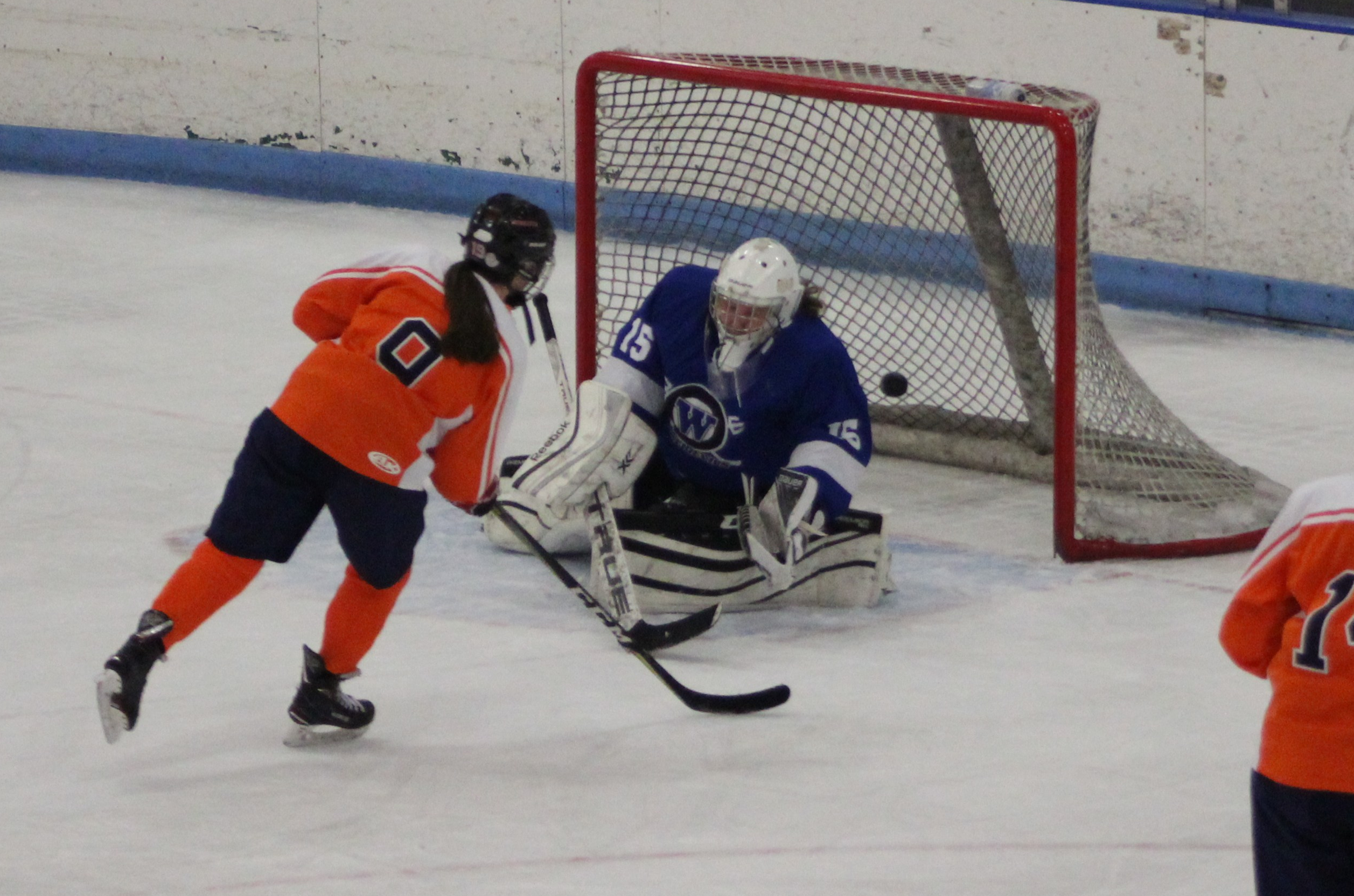 Freshman Adriana C. puts the puck in the corner of the net against Westfield on Dec. 20 at the Middletown Ice Arena. (Photo by Morgan Kogan)

Assistant coach Cathryn Danielczyk is proud of the girls’ performances thus far and excited for future matches. “We had some girls skating for 8 to 10 minutes straight, which is incredibly difficult,” Danielczyk said of the players in the Westfield game. “They were absolutely amazing. Talk about perseverance,” Danielczyk said.

The team is made up of just nine students, two juniors and seven freshmen. Freshman Noelle Turek is currently serving as team manager as she is sidelined with an injury. The size of the team is small in comparison to their opponents’ teams, as the average hockey team has about 18 players. About half of the girls have previous experience with ice hockey, while the remaining players have never played at any level.

“The experienced players have been extremely helpful and supportive of the new players both on and off the ice. I have been very impressed with their patience and leadership to help form a cohesive team unit,” Danielczyk said.

The hockey team began after the Athletic Advisory Committee noticed that several freshmen played hockey and had experience with the sport. Last winter, former teacher Alyssa Anderson coached a clinic to generate interest in ice hockey. This year is the program’s first as a fully functioning and practicing team. Despite the newness of the team, the athletes say they instantly became good friends and tight-knit teammates.

“They are an amazing, fun, caring and encouraging group of girls. The newness of the team contributed to how supportive one another is,” junior Riley Francese said.

Though the hockey team has no appointed captains, the freshmen look up to Francese and fellow junior Carolyn Litwin for support and guidance.

“Riley and Carolyn have put so much hard work into the practices and games, and it inspires me to do the same. It is amazing to have them as teammates, and I’m so glad that I have them to look up to,” freshman Anna Clements said.

The hockey team may be the newest addition to the athletic program, but the athletes are already looking towards the future. They are hopeful about matches, players and the team’s growth as a whole.