This past holiday season, the chorus and instrumental groups, led by music teacher Andrew Bogdan, not only decked “the Hall” with their voices at masses and prayer services, but also ventured to a Monmouth County Historical House for their first performance outside of Trinity Hall.

The 17 members spent the month leading up to their performance preparing eight holiday carols, which required additional after-school rehearsals.

“Chorus has a great dedication to working on not only our individual voices but the group sound we can make as a whole, ” said Bogdan, who has led the group for two and a half years.

On Dec. 8, the two groups arrived with Bogdan and theater teacher Ellen Phillips to the Monmouth County Historical Society’s Taylor-Butler House in Middletown. The girls, dressed in black with red, green, or gold accents, stood along a staircase decorated with garland. 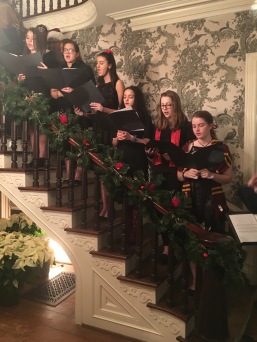 “As people walked in for the party, we were there singing…like their personal background music,” sophomore Margaret Hough said. Hough’s mother, Vera, a member of the Monmouth County Historical Society, organized the gig for the chorus and invited them to sing at the Christmas-themed cocktail party.

Bogdan explained the transition from singing for the school to singing for strangers. “…It was rewarding for all of us…to have been invited somewhere and feel the recognition and the honor of that, but also just to go out and perform for people that we don’t know. To know that we’ve done that, and can do that, I think it is a great confidence boost for all of us. It was certainly one of my favorite musical memories at Trinity Hall.”

Senior Joanna Ferrer, who has been a member of the chorus since its beginning, agrees that this opportunity was an important moment for the group. “We’ve grown…when we first started we were really small, and I never really thought it would grow this fast. It’s exciting!”

With a committed group of students, the chorus and instrumental groups always welcome new members and hope to continue taking their talents outside of the school community. “I am very excited for a potential trip that may be coming up in April and two competitions that exist in New Jersey. I hope to get us involved in at least of those, possibly both,” Bogdan said.

One thought on “Chorus and Instrumental Groups Carol at Historical House”