The Queen’s Court Company and Crowning Crew ended their theatrical year with a three-show run of the musical Seussical from March 23-25 that exhibited the artistic talents of the cast and crew while also marking the end of the seniors’ drama careers at Trinity Hall.

The whimsical world of Dr. Seuss was brought to life by the students’ performances and their intricate behind-the-scenes work.

“This show was particularly challenging and definitely different from our previous productions,” said Nicole LoRusso, assistant director. “The main challenge [was] that the show is all singing, which meant the actors and musicians had to learn over 426 pages of music. But the fact that every role was so crucial to the storytelling made this a perfect show for us because it allowed so many more voices to be heard, no matter how small they may be.”

LoRusso’s thoughts echo the main message of Seussical, which tells the story of Horton the Elephant and his determination to save the citizens of WhoVille. As Horton attempts to save his small friend, JoJo, the elephant faces a plethora of challenges with monkeys, birds, hunters and an egg.

Production Director Ellen Phillips and Musical Director Andrew Bogdan were up for the challenge presented by this visually and musically complex production, and worked endlessly on ensuring the blocking, vocals, acting and stage design would bring the show to life. As the story encompasses the values of friendship, leadership, community and perseverance, Phillips felt the show’s message would provide the cast and the audience with important life-lessons and values. 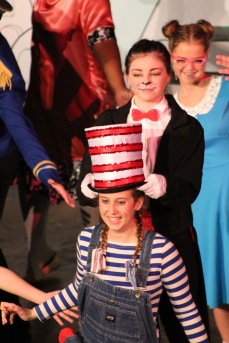 Seniors Grace M. (top, as The Cat in the Hat) and Sarah F. (bottom, as JoJo) co-star in their final Trinity Hall production of Seussical, which was staged March 23-25 at The Jersey Shore Arts Center in Ocean Grove, NJ. Photo by Melissa Whelan

“I’ve always wanted to direct this show. I’ve always loved Dr. Seuss’s stories and made sure that they were a part of my daughters’ lives when they were younger because of the important messages they teach,” Phillips said. “I felt it was the perfect time to put on this production because it is the first year we have seniors leaving for college, and I wanted to leave them with the positive messages these stories encompass.”

While it was certainly a time to celebrate with singing and laughter, for the graduating seniors, it was a bitter-sweet production. After founding the company four years ago, they have developed a strong bond with each other and the memories they made throughout the course of rehearsals and productions over that time.

“It’s sad that my time with the Queen’s Court Company has to come an end, but I am very proud to see how much we have grown,” said senior Grace Molloy.

The underclassmen similarly share a sense of sadness but also one of gratitude to the seniors who have helped to build the theater company. While the program says goodbye to the founding actresses of the program, they leave the program in good hands.

“The seniors have inspired me and have given me the confidence to get up on stage and do what I love,” junior Marisa Goolcharan said. “It will definitely be different next year without them, but I hope we can follow in their footsteps.”