The varsity swim team, coached by Alyssa Morreale and assistants Tracey Andrejko and Erin Chiaravalloti, finished the program’s best season ever with a 10-1 record. But more impressive than their dual meet record was the four championship titles the team claimed this season, starting with the Monmouth County Championship title they shared with Middletown South HS in January (see previous article). The Monarchs followed that accomplishment by winning the Shore Conference Championships, another first for Trinity Hall, then by defending their titles as B-Division Prep (NJISAA) State Champions and the NJSIAA/Parisi Speed School Non-Public B Champions. Five swimmers also competed at the Meet of Champions at GCIT on March 4-5 in both individual and relay events.

MacKenzie K. charges to the wall in the 100 butterfly at the NJSIAA State Finals at TCNJ on Feb. 26. Photo by Melissa Whelan

Finishing with 295 points, the Monarchs earned first place in their debut at the Shore Conference meet at Ocean County YMCA on Feb. 3. Seniors Caroline Gmelich, Lily Scott and Malia Wolf and junior Lauren Joyce set a meet record with a time of 1:49.66 in the 200 medley relay, and Gmelich set a meet record with her time of 55.57 in the 100 backstroke in addition to her win in the 200 individual medley. Wolf placed first in the 100 butterfly, and the 400 freestyle relay team of Wolf, freshman Catherine Wright, senior Isabelle Pabon and Gmelich finished the meet with a first-place win to clinch the championship.

Less than a week later, the Monarchs were back in the pool at The Lawrenceville School where they reclaimed the top spot in the Prep State B-Division by outscoring second place Villa Walsh 352-221. Gmelich, who was named Most Oustanding Swimmer, was a double-winner in the 200 IM and 100 backstroke, and Wolf captured gold in the 200 freestyle and 100 butterfly with two come-from-behind finishes. 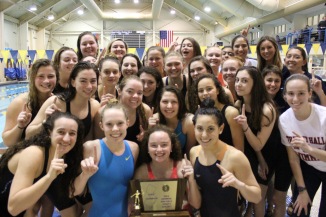 The Monarchs faced off against Villa Walsh again on Feb. 26 in the NJSIAA/Parisi Speed School Non-Public B finals at TCNJ, this time in a dual-meet format where they won all but one event to defend their championship title by a final score of 118-52.

This past weekend at the prestigious Meet of Champions, Gmelich earned the title of NJ State Champion when she won the 100 backstroke shortly after her second-place finish in the 200 individual medley. Wolf won the consolation final heat for the 200 freestyle, finishing in ninth place. The 400 freestyle relay team of Wolf, Scott, Pabon and Gmelich broke the old school record by two seconds to claim fifth place, their highest relay finish ever at Meet of Champions, while the 200 medley relay team of Gmelich, Joyce, Wolf and Scott placed seventh. Wolf also competed in the 100 butterfly, Scott in the 50 and 100 freestyle, Joyce in the 200 individual medley and Pabon in the 500 freestyle.

The winter track team, coached by Tony Avallone and Maria Crowley, continued to break their personal and school records throughout the course of the winter season.

On Dec. 28 at the NJ Catholic Track Conference Relays, the 4×200 relay team of senior Erica O’Kelly and juniors Anna Barnett, Lexi Salerno and Cate Toomey ran a season best time of 1:57.00. At the Monmouth County Championships on January 13, O’Kelly, Salerno and Toomey all clocked personal bests in the the 1600m run. On Jan. 27 at the Shore Conference Championships, Barnett also ran her personal best time for the season in the 1600m race.

At the New Jersey Catholic Track Conference Championship, the Monarchs took first place for the Non- Public B Group. The 4×400 team of junior Gina Rienzo, sophomore Hannah Reynolds, Toomey and O’Kelly ran a time of 4:19.10. Toomey, Barnett, Salerno and O’Kelly won the 4×800 relay with a season best time of 10:00.92, which qualifyied them for Eastern States on Feb. 28.

At the NJ Meet of Champion on Feb. 26, the 4×400 relay team (Toomey, O’Kelly, Rienzo, Reynolds) ran a season-best time of 4:17.91, and Reynolds ran a time of 7.74 in the preliminaries for the 55 meter dash. Reynolds and freshman Ryen Miller also competed in the 55 meter race at Eastern States along with the 4×800 relay squad of Toomey, Salerno, O’Kelly and Barnett.

Their successful run helped the Monarchs qualify for the Shore Conference tournament, where they faced Holmdel High School in the first round on Feb. 14. In front of a large crowd of Trinity Hall students, faculty, staff and parents, the Monarchs fought hard until the final buzzer but came up just short with a final score of 43-54. The varsity squad also competed in the NJSIAA Non-Public B tournament, where they played a tight game against Roselle Catholic but eventually lost 51-70.

Although the junior varsity team, coached by Lauren Pappa, was a new addition to the athletic program, they have proven their skills and determination with their record of 6-5. One of their strongest performances came against Monmouth Regional High School on Jan. 20 when the Monarchs eked out a two-point win.

“It was a close game; it kept going back and forth, and we were able to prevail in the end,” said Pappa.