The varsity cross country team competed in several championship meets during the last month of its long season, finishing at the highly competitive Meet of Champions. The team and their coaches, Tony Avallone and Maria Crowley, began practicing in July in order to give them ample time to improve their skills, better their times and build their camaraderie.

“We worked together and learned more about each other, whether it be through pasta parties or through really hard or long practices,” freshman Grace Shimkus said. The months and hours of training paid off in the end, as the team proved with impressive performances at post-season championship meets.

The team finished in 11th place at the Monmouth County Championships on Oct. 18 to earn a spot in the Shore Conference Championship, where they placed 9th on Oct. 28 at Ocean County Park.

“We gave it everything we had, and did so as a team,” said freshman Caroline Meany of the team’s performance at the Shore Conference Championships. “We had outstanding support from the ‘Monarch Nation,’” she continued, referring to the enthusiastic crowd of Trinity Hall fans at cross country meets.

Two weeks later, the team of seven varsity runners claimed 2nd place in the NJSIAA Group Non-Public B State Championships on Nov. 12, a finish that qualified them for the Meet of Championships. 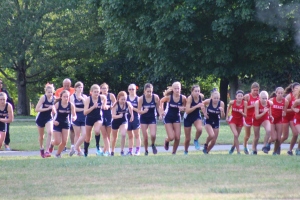 “Standing with my team receiving our second place award was something I will never forget,” Meany said. “I think we have been portrayed as underdogs this season, being a young school. However, we definitely proved ourselves during the race, finishing second as team.”

Eight girls from the team competed at the Meet of Champions on Nov. 19, placing 20th among dozens of the state’s best high school cross country teams.

“The atmosphere [of the meet] was unbelievable, the woods were lined with hundreds of spectators, and you could feel whirlwinds of excitement and nervousness in the air,” junior Bridget Andree said about her experience at the Meet of Champions.

Despite their achievements, the cross country team also faced some challenges, most notably injuries that plagued many of the runners throughout the season. As most of the injuries were stress related, the runners learned to be proactive by doing the right exercises and stretches to prevent more damage while adjusting to increased mileage.

“As a distance runner, you walk a very fine line between perfect fitness and injury,” Crowley said.

Since this year’s team only had one senior, Grace Modderman, the team hopes to improve upon its success next fall with the return of so many experienced runners.

“Next year, our goal will be to claim that first place title [at the State Championships],” Andree said.