After months of planning, the junior class held the school’s first prom on May 12 on the River Queen cruise ship out of Brielle. With 65 students and 7 faculty members in attendance, the night was filled with laughter, celebration and a lot of dancing.

“Prom. Four letters and one word that has many expectations. For Trinity Hall’s junior prom, I knew going in that it would have to be one to remember since it was the first one in our school’s history,” said Lily Scott, junior class president.

Lilly McCann, junior class representative for the community life council, and Chloe Toole, student body president, joined Scott to lead the planning of the event alongside Head of School Mary Sciarrillo and Assistant Head of School James Palmieri. Spending most of their time in and out of school anticipating the event, the student council leaders worked hard with members of the prom committee to ensure their classmates would have a night to remember.

“Planning prom was a stressful time for me and those on the prom committee. We had to decide on a venue and decorations, and figure out all of the logistics beforehand, ” Scott said. 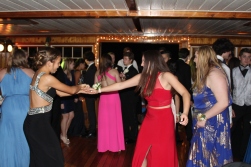 Erica O., Alexa A. and Abby M. dance the night away at the school’s first prom on May 12. Photo by Alyssa Anderson

Working during lunch and open periods to make the name cards, decorate the favors, make the centerpieces and coordinate and finalize the details with Sciarrillo and Palmieri, the leaders worked diligently to get all of the details perfected. In addition, the prom committee organized fundraisers, such as a bake sale and an acai bowl sale, to help offset the cost of the event in order to keep ticket prices affordable.

“The prom committee leaders did everything in their power to ensure that our prom would live up to the expectations girls dream about throughout their lives in school,” junior Alexa Alverio said. “On behalf of the student body, I can easily say we are grateful for all of their hard work and we know it wouldn’t have been possible without them.”

Before the girls and their dates got on the boat, some of the faculty members that could not attend the prom came to the dock to see the girls dressed up and ready for the evening. As the students are in their uniforms on a daily basis at school, the teachers and even the students are not accustomed to seeing each other dressed up for such a formal event.

Brenna D. and her date pause for a photo before boarding the River Queen in Brielle for the prom on May 12. Photo by Alyssa Anderson

“I enjoyed getting to see my classmates wearing the stunning dresses and having their makeup and hair done since we don’t get to go to events like prom together often. Everyone looked beautiful,” Alverio said.

Humanities teachers Melissa Whelan and Alyssa Anderson arrived early to snap pictures of the girls so that they would have a remembrance of the night. Anderson took the pictures in front of the boat, and Whelan had them developed and put in homemade picture frames in time for the boat’s return.

The venue of a river cruise allowed students to take a break from the crowded dance floor to watch the sun set on the inlet and enjoy the beauty of the shore. They even caught a glimpse of math teacher Kevin Polke and his children who waited along the inlet to see the boat pass.

“The dance floor was a good size and wasn’t big for our smaller class. I liked the outside atmosphere because you had the ability to go get fresh air,” junior Grace Modderman said.

Whether the students brought dates or flew solo, the girls had a memorable time at prom and are already looking forward to their senior prom next year. Even though the prom preparations, which included finding the perfect dress, getting hair, nails and makeup done, and, for some, planning the event itself, were stressful at times, the memorable evening will always be special to the inaugural class.

“The prom went extremely well thanks to all of the help from the other co-heads of prom, Chloe Toole and Lilly McCann, the prom committee, Mrs. Sciarrillo and Dr. Palmieri, and the rest of the Trinity Hall community,” Scott said. “I look forward to seeing what’s in store for next year’s prom.”