The varsity swim team, now in its third year, completed its regular season with record of 6-3, including major victories against Villa Walsh and Oak Knoll. The team of 20 swimmers is coached by Alyssa Morreale and Erin O’Malley.

In addition to achieving their first winning season, Morreale said that the team’s meet against Peddie has been one of the highlights of the season. “Even though we didn’t win, we continued to narrow the gap in the score between ourselves and one of the best teams not only in New Jersey but in the country.” The competitive meet started with the Monarchs’ 200 medley relay of junior Caroline Gmelich (backstroke), sophomore Lauren Joyce (breaststroke), junior Malia Wolf (butterfly) and junior Lily Scott (freestyle) breaking their own pool record at Neptune Aquatic Center (NAC) by 2 seconds.

On Jan. 9, the swim team competed in the Monmouth County Championships at the NAC, where they placed third overall. Trinity Hall was the only school in the boys or girls championship to break a meet record, as the 200 medley relay broke their own meet record and junior Caroline Gmelich broke the record for the 100 backstroke, while also winning the 200 individual medley.

Junior Caroline G. takes off for her leg of the relay against the Peddie School.  Photo by Melissa Whelan.

Sophomore Lauren Joyce, who placed first in the 100 breaststroke, second in 200 individual medley and was a member of the winning 200 medley and 400 freestyle relay teams, said that this meet showed significant improvements from last year’s. “We all got faster from last year, and it was exciting to see how well we all placed,” said Joyce. Despite coming in third place, the team still considers the Monmouth County Championships to be a success, and rightfully so. “We showed Monmouth County what we are made of, even with our three classes!” said Joyce. Top finishers also included juniors Isabelle Pabon (third in the 500 freestyle and second in the 200 freestyle) and Wolf (second in the 100 butterfly and 200 freestyle), who joined Gmelich and Joyce on the winning 400 freestyle relay, while sophomore Ava Lynch and juniors Abby Marcin and Scott also scored valuable points for the Monarchs in their events.

Now that the team has accomplished its goal of earning a winning regular season record, they will focus on trying to win the Prep State Championships “B” Division on Feb. 3 at the Lawrenceville School as well as the NJ Team State Championships, where the team is seeded first in the Non-Public B division and therefore has a “bye” into the semi-final round on Feb. 15.

On Jan. 16, the team ran in the Non-Public Group B relays, placing seventh out of 23 teams. The 4×800 relay of Toomey, Rienzo,  Kawatra and Salerno placed second, while the distance medley relay of O’Kelly, Rienzo, Toomey and Kawatra placed third.

So far, Avallone and Crowley feel that their 22 runners are off to a good start. More than anything, the coaches are looking forward to see how much their runners can improve by the end of the season. “It’s all about the improvement,” Crowley said. With enthusiasm, hard work and support for each other, Avallone and Crowley believe that good things are in store for the rest of the season.

Over the winter break, the team participated in the Long Branch Tournament where two victories against Old Bridge (52-15) and Shore Regional (41-29) and one loss against Monmouth Regional earned the Monarchs third place in the tournament. 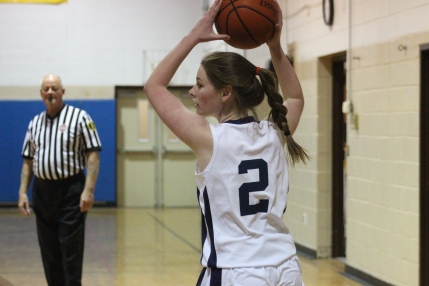 The team’s two recent victories over varsity squads, including a two-point win over Freehold Township thanks to a 3-point shot by Kwapniewski with less than 10 seconds on the clock, shows the improvement the young team has made already this season.

“It’s going to make us a stronger as a team and individuals,” said Knepple about playing on the varsity level despite having only sophomores and freshmen on the team. Her sentiments echo the encouraging words Coach Grier often says in team huddles during games and practices: “If you believe you can, you will.”

February will be a busy month for the Monarchs as they take on Monmouth Regional (Feb. 1), Point Pleasant Boro (Feb. 2) and Long Branch (Feb. 4) before heading into the NJ Prep State Tournament.