Although students are only in the second month of the school year, they have already participated in multiple service projects in the community, including Cardboard Box City, Bubble Soccer and the Red Bank Crop Walk.

The “Trinity Hall Monarch Metropolis” was constructed by participating students and faculty to serve as their overnight shelter at Cardboard Box City in Tinton Falls on Sept. 25. Photo by Lauren Pappa

Approximately 15 students and six faculty gathered on Sept. 25 at the Monmouth Church of Christ in Tinton Falls for Cardboard Box City, an event held in order to spread awareness about homelessness and to raise money for Family of Promise of Monmouth County. Many participants stayed overnight and slept in the cardboard boxes they constructed while others helped by serving dinner to those sleeping overnight.

“I went last year to help the [school’s] service club serve dinner, but we didn’t get to stay [overnight]. After seeing how much fun it seemed to be and that it was for such a good cause, I knew I wanted to come back this year and stay over,” junior Grace Molloy said.

Molloy won the event’s essay contest for her essay on teen homelessness (see “Student Spotlight”), but she chose to give her $100 prize back to the foundation, as did sophomore Hailey Hartnett and freshman Anna Phillips who won the “Best Decorated Cardboard Box” contest.

“My essay was about what it’s like to be a homeless teen and how hard it is for them because they don’t only feel the burden of homelessness on themselves but they also feel the stress their parents face, and they face a great deal of societal pressures,” Molloy said. “From the start it was a no-brainer to give back the award because I know the great work the Family of Promise does and I want to see them do all that they can so that money will go to a much better cause in their hands.” 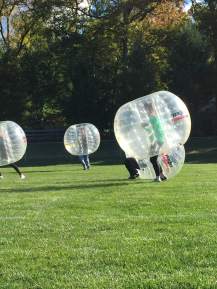 Students from Trinity Hall and CBA gathered at CBA on Oct. 18 for fun games of Bubble Soccer to raise funds for The Teddy Fund. Photo by Grace Molloy

Just two weeks later, on Oct. 18, students participated in Bubble Soccer at Christian Brothers Academy [CBA] and the Crop Walk in Red Bank. While some students chose to attend one of the two events, six students went straight from Bubble Soccer to the Crop Walk, making their Sunday a full day of service.

In the morning, 16 students played Bubble Soccer, which was organized by a CBa student to raise money for Teddy’s Fund, a non-profit foundation started by Trinity Hall founders Justin and Victoria Gmelich in memory of their son Teddy that has provided financial support for students at CBA and Trinity Hall. Students from both schools wore giant inflatable balls while playing fun games of soccer.

“I wanted to participate because it was for Caroline [Gmelich]’s family’s foundation and it supports Trinity Hall students so that they are able to attend Trinity Hall. I enjoyed running into and hanging out with people I knew that were also participating,” junior Grace Modderman said.

Later that day, 25 members of the school community volunteered at the Red Bank Crop Walk to help fight global hunger. In addition to raising more than $700, participants walked and passed out water at rests along the path. Junior Lily Scott played a major role in organizing Trinity Hall’s involvement in the event for the third consecutive year. 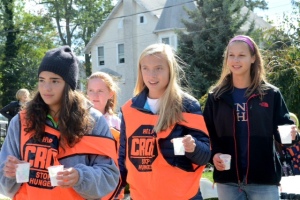 “Instead of collecting rice and beans this year, we decided to raise funds because we felt it was easier to collect and transport,” Scott said. “Collecting money was more fun as well because we were able to make the collection a competition between advisories. The two winning advisories, 2 and 12, collected more than $100 each, and together we raised more than $700 for the cause.” Scott also noted that although there were less participants from Trinity Hall at the walk this year compared to 2014, the enthusiasm of the group was much improved.

Melissa Whelan, service club advisor, is planning to build on the students’ enthusiastic commitment to service by encouraging further participation in upcoming opportunities, especially during the holiday season. “There are lots of volunteer opportunities with the Middletown Township, and we already have ideas floating around for Christmas,” said Whelan. “I’m glad to see so many students coming up with ideas and getting involved.”